In 1999, while looking for a building in which to house his dream, our founder Godfrey Pasmore, was offered a partially abandoned stone barn on the Macdonald Campus of McGill University. This centennial building has a very unique history.

In 1907, Sir William Macdonald financed the construction of a facility to be used as “a rural college (where students) …. might learn improved methods of farming and be trained in the science of agriculture”. His instructions were simple: The architects were to design a barn “in the Scottish style” with the stipulation that minimizing the risk of fire must be a major consideration in its design. His concern with fire can probably be attributed to the loss of the family home and barn on Prince Edward island in 1889. As well, McGill’s Engineering Building, which had been rebuilt with his financial help, was destroyed by fire in 1907.

For fire prevention reasons, the main building for the herd of Ayrshire cattle was built of stone with a roof cast in concrete slabs. There was, of course, no heating system as the body heat emanating from the animals would keep the inside temperature warm. Kerosene lanterns were the only source of light in the barn, and stray sparks could easily ignite the hay and straw used for fodder and bedding. For this reason, there was never more than a single day’s requirement of these flammable materials within the main building. The hay and straw were stored in two barns some distant away. Each morning, the daily allotment was carried through a corrugated steel breezeway to a 50-foot-long stone and concrete “tunnel” that connected the breezeway to the cattle barn. Ironically, the hay and straw barns were lost to fire some years ago, although their foundation slabs can still be seen.

In 1999, renovation of this Heritage building, affectionately known as “The Old Stone Barn” and home of the fledging Canadian Aviation Heritage Centre, began. All manner of tasks awaited the volunteers; shovelling out knee-high bird dung in the silos, installing bathrooms, constructing new walls and electrical systems,  and installing a new roof, just to name a few. The transformation has been remarkable and the “Old Stone Barn” is constantly being renovated and maintained year after year, helping to preserve this important historical building and create more space for the Museum’s growth. 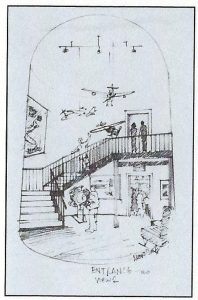